Strategic litigation is a way to use the law to improve human rights for children and young people.

Q:
What is strategic litigation?
A:

When a case like this comes up, the Commissioner may ask the court’s permission to intervene— become involved. When they do this, the Commissioner doesn’t take sides or represent children directly. Instead, they bring issues about children’s rights to the court’s attention to help the judge make a good decision. Doing this is a way of doing strategic litigation.

What strategic litigation have we taken on?

In 2018 and 2019 we were given leave to intervene – were allowed to become involved – in two cases involving the rights of children and young people.

The first case involved children whose parents were not allowed to receive benefits because of their immigration status. After we became involved, the case was resolved, out of court.

Our intervention in the case revolved around the condition of no recourse to public funds, which we highlighted as a breach of children’s human rights in our first legal briefing. This briefing informs and provides human rights defenders with the tools necessary to advocate and challenge on behalf of children and young people. 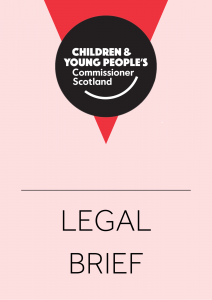 Our first legal brief concerns children and families with insecure immigration status who have been turned away from local authority supports to which they are entitled.

In the second case, we asked the Court of Session in Edinburgh to allow us to intervene in a case involving a child who was being deprived of their liberty in a residential children’s house.

The child had been placed in a children’s care home in Scotland by the High Court of England and Wales without a Scottish legal order being in place.

The child was under constant supervision, in a different country, with very limited access to her family and friends and this was a breach of her human rights. The Commissioner was allowed to intervene in the case as they are concerned there may be other children and young people in a similar situation. The case concluded when the child was returned to England.

Q:
What is the Court of Session?
A:

The Court of Session is the highest civil court in Scotland.

The highest civil court is the one with the most authority of all. Once they make a decision, it can only be appealed to the UK Supreme Court, and only in some circumstances.

In 2019, following the publication of our report into restraint and seclusion in Scotland’s schools, the Commissioner worked with the Equality and Human Rights Commission Scotland who supported a Judicial Review against the Scottish Government.

Find out more about this.
top