The Convener of the Justice Committee has written to Cabinet Secretary for Justice Humza Yousaf MSP and the Acting Chief Executive of the Scottish Prisons Service after the Commissioner and the Scottish Human Rights Commission (SHRC) both raised concerns around the human rights of people in Scotland’s Young Offenders’ Institutions and prisons.

The amended rules relax requirements to meet some basic needs including nutritious food, clean socks and underwear, family contact, and access to bathing or showers. These measures impact on the human rights of children under 18.

Both ourselves and the SHRC are concerned that in some cases the conditions they are experiencing may constitute cruel and degrading treatment under Article 3 of the European Convention on Human Rights.

And we’re both concerned by a lack of action to address these human rights issues by the prison service itself and the Scottish Government. 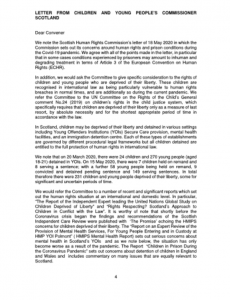 Letters to the Justice Committee highlighting concerns around recent measures by the Scottish Prison Service and their impact on the human rights of those in prison and in Young Offenders’ Institutions.

What concerns did we raise to the Justice Committee?

Specific concerns raised in our letter to the Justice Committee included:

Children and young people are being held in solitary confinement

We understand that some children and young people in Young Offenders’ Institutions are currently confined to their cells for up to 23 hours a day, while those who show symptoms of Coronavirus are not allowed to leave at all.

We’ve been told that children have no access to education, group activity or exercise, which is  currently very limited at Young Offenders’ Institutions.

Visits from social work have stopped

We’ve been told that social work visits have stopped, which will affect the level of support provided to children. It will also mean less additional scrutiny over protection of their rights, and a lesser ability for them to be assessed for release and prepared for release after assessment.

Although direct family contact is recognised as playing a huge role in lessening the impact of vulnerability and mental illness, we’ve been told it isn’t taking place. We understand that no measures have been taken to allow any physical or virtual contact to take place— such as socially distanced visits or significantly increased telephone and video contact.

Duties around hygiene are relaxed

Restricting access to showers has an impact on human dignity, but that’s not the only concern we have― given the importance of hygiene in preventing the spread of coronavirus, we question how infection control is being managed.

Before the pandemic there were already concerns about the level and quality of mental health support for children in Young Offenders’ Institutions.

A report from the HM Inspectorate of Prisons for Scotland highlighted significant mental health concerns for those on remand, awaiting sentence, or in the early stages of their sentence― the groups identified as being most vulnerable to episodes of self-harm or suicide.

One of the key reasons given for children in remand being vulnerable was their experience of social isolation, which is likely to have worsened due to the pandemic.

In June 2019 the Scottish Government agreed to install telephones in cells in Polmont Young Offenders’ Institution, and in April 2020 the Secretary for Justice announced the Scottish Government’s intention to provide mobile phones to those in custody. At the time of writing, neither of these things had happened.

In April 2020 and in response to the coronavirus pandemic, the UN Committee on the Rights of the Child called on all States to release children from detention where possible, and to give children who can’t be released the means to keep in regular contact with their families.

While some children are covered by Scotland’s early release regulations, 16 and 17-year-olds detained in Young Offenders’ Institutions are subject to the same eligibility criteria as adults. These criteria aren’t based on human rights, and make no provision for assessment of children’s rights, needs and wellbeing. There is no evidence that the Government gave any consideration to the specific needs and rights of children when drafting the regulations.

International expert opinion is overwhelmingly in favour of detained children being individually assessed for release using a human rights approach, and we’re calling on the Scottish Government to urgently make this happen for those in Young Offenders’ Institutions.

This approach would be consistent with the Government’s obligations in international law to grant children additional legal protection and consideration.

We’re particularly concerned that children on remand haven’t been included in the early release regulations, and that this will have a disproportionate impact on them.

They are now likely to be facing detention and deprivation of their liberty for significant and uncertain periods of time― without having been convicted of any offence. 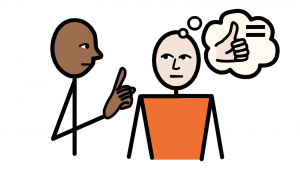